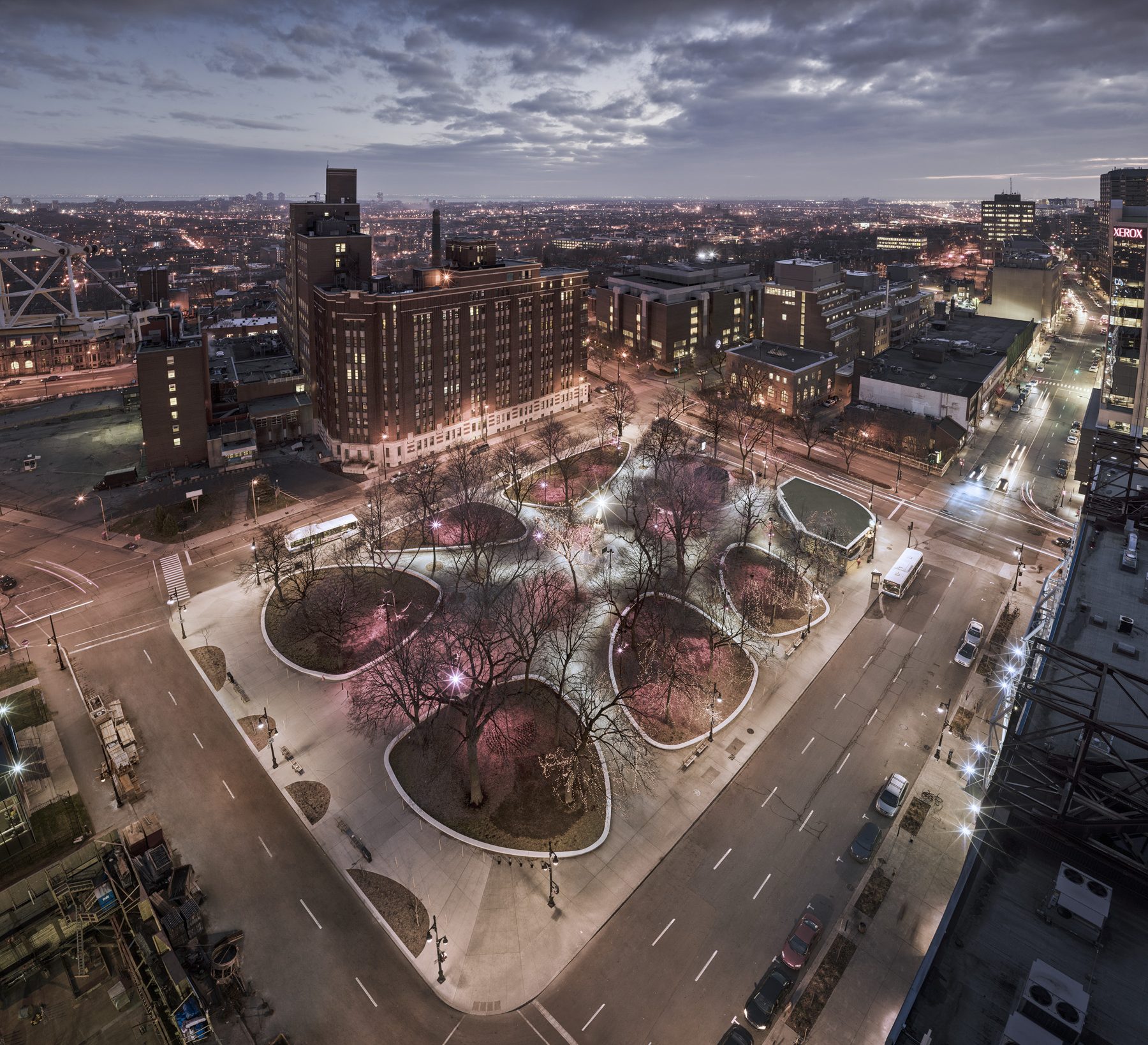 Cabot Square is one of downtown Montreal’s emblematic public spaces.  Laid out for the first time in 1890 in the formal Victorian style of the time, the square was redesigned in the 1930s by Frederick Todd and revitalised again in 1997. The three iterations of the square share common attributes including abundant vegetation, a ‘union-jack’ plan with diagonal paths and a central focal element.

For over a century, Cabot Square has been distinguished by its hybrid character, adapting its spaces to an evolving urban landscape.  Over the years, the physical and social ecology of the neighbourhood has declined and the square became derelict and inhospitable. The new design focuses on the intrinsic qualities of the square and aims to re-establish the delicate balance between hybrid elements and experiences: sunlight – shade; freedom – security; organic surfaces – mineral surfaces; neighborhood – metropolis; privileged users – disadvantaged users; intimacy – openness; a space for contemplation – a space for gathering.

In order to focus on rebalancing the square’s hybrid relationships, the project adopts a minimalist design strategy that encourages a flexible appropriation of the space by different users.  A series of signature gestures combines utilitarian and symbolic intentions into a unified design. Ground-cover and indigenous plants chosen for their resistance to intense shade create a group of generous green islands that are organised to recreate the diagonal movements of the original ‘union-jack’ plan. The transition between mineral and organic surfaces is marked by undulating concrete elements that are at once borders, walls, curbs, and benches.  Providing a place for rest and contemplation, these gentle curvilinear forms frame the central court where John Cabot presides.

Suggestive of a natural cathedral, Cabot Square’s extensive canopy is a precious resource for the city. The preservation and regeneration of the square’s mature trees was a primary objective of the project and great care was taken during both planning and construction phases to limit site excavation and protect the canopy’s root system. The generous mineral surface at the center of the square is both a flexible space for cultural activities and a rainwater collection system that irrigates the trees. A first for Canada, the square’s crushed marble aggregate is an innovative product that provides both a stable mineral surface and significant permeability. The sidewalks around the square use an improved concrete that incorporates recycled glass powder to augment its durability.

In parallel to the physical renewal of Cabot Square, the City of Montreal developed a comprehensive program to facilitate community revitalisation. The evaluation of the needs of marginal groups such as the local aboriginal population stimulated the establishment of a program that enhances cultural exchanges and promotes social diversity. Instead of relocating the homeless aboriginal population, the program seeks to integrate this group into a broader cross-section of users. A restored historic park pavilion houses the offices of community workers and a café run by an aboriginal group. These initiatives ensure the maintenance of an inclusive, sustainable, and resilient urban environment. 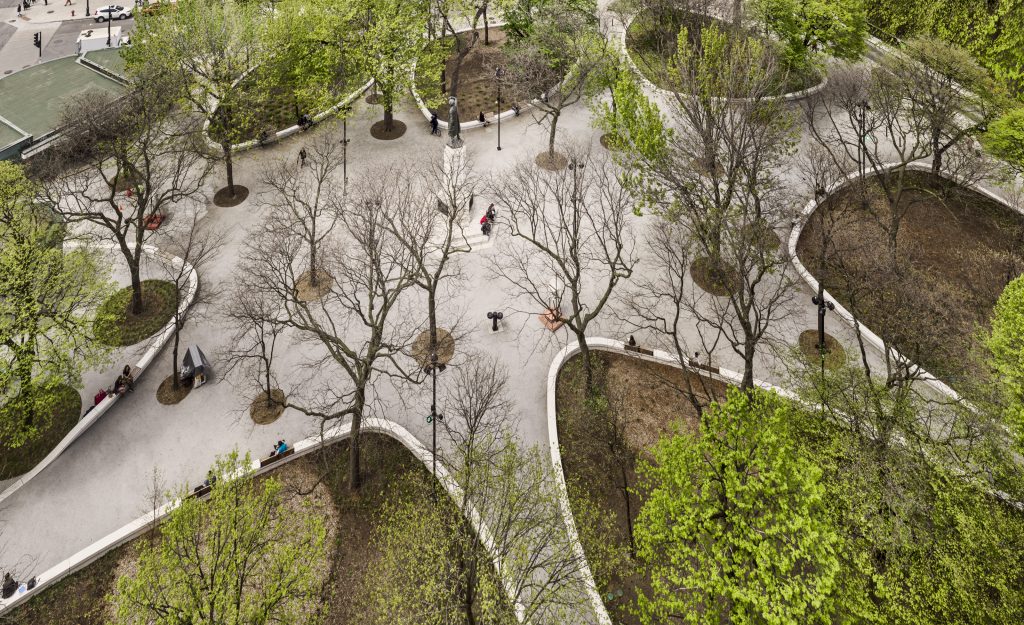 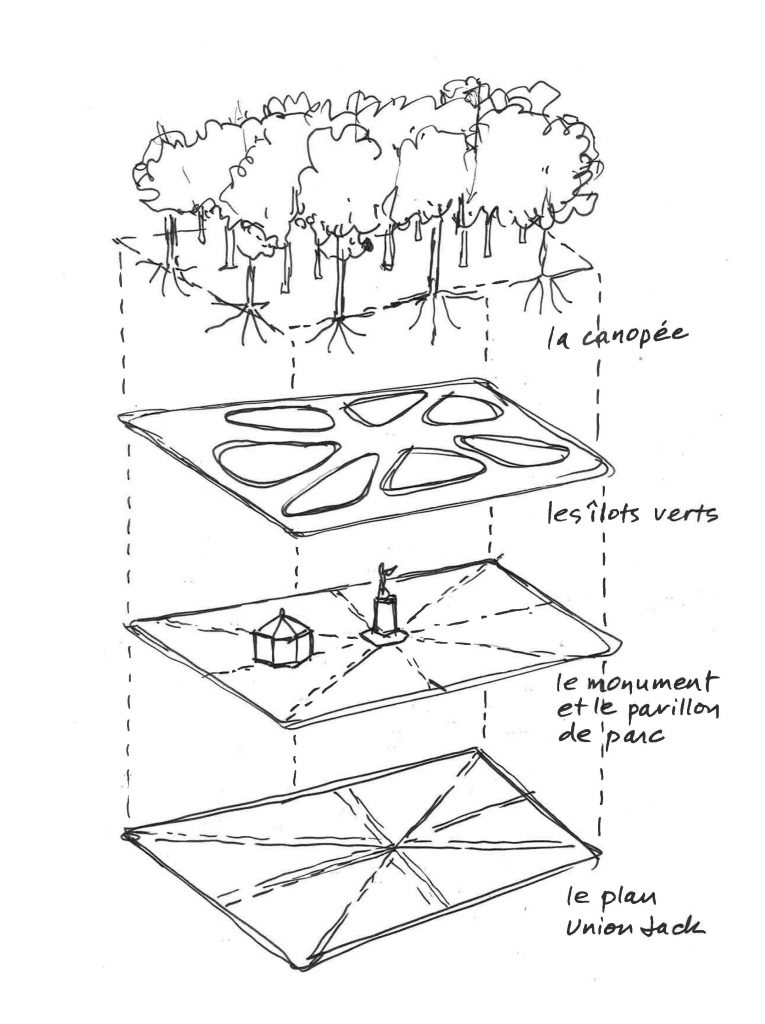 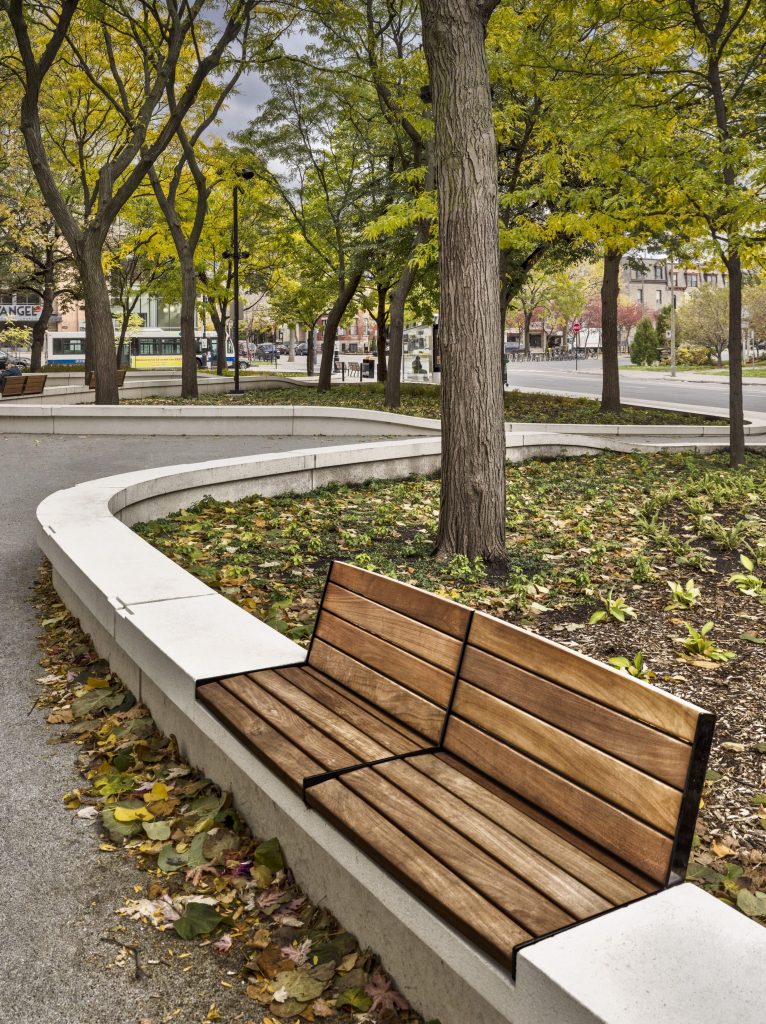 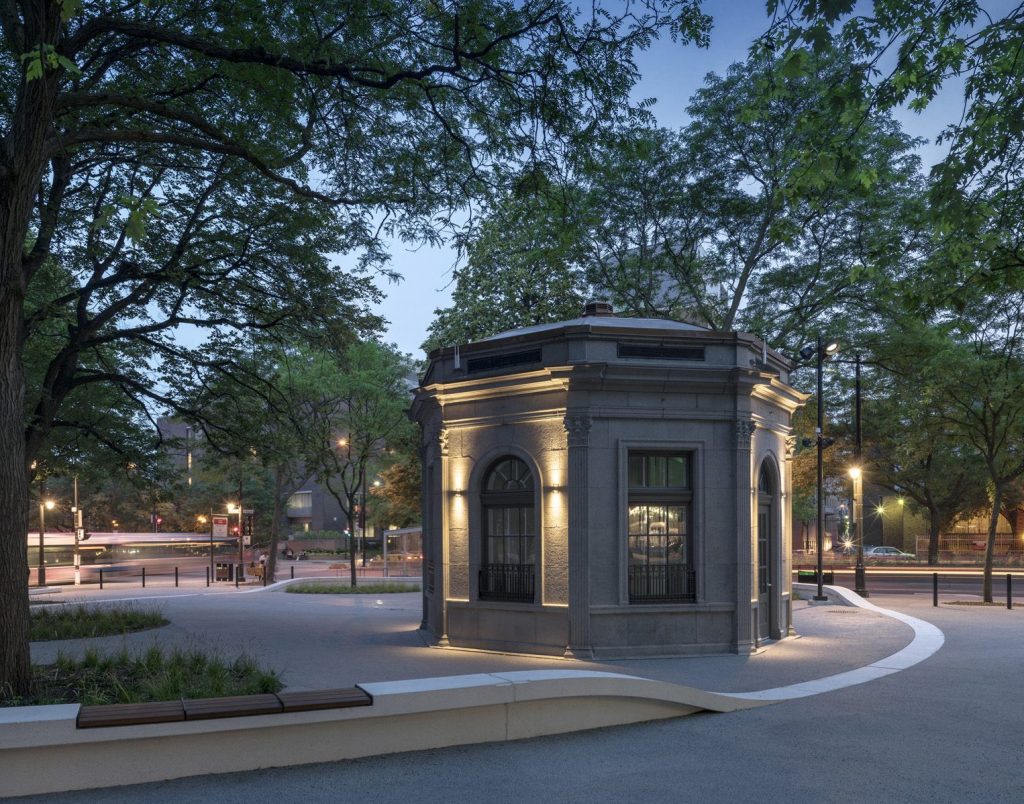 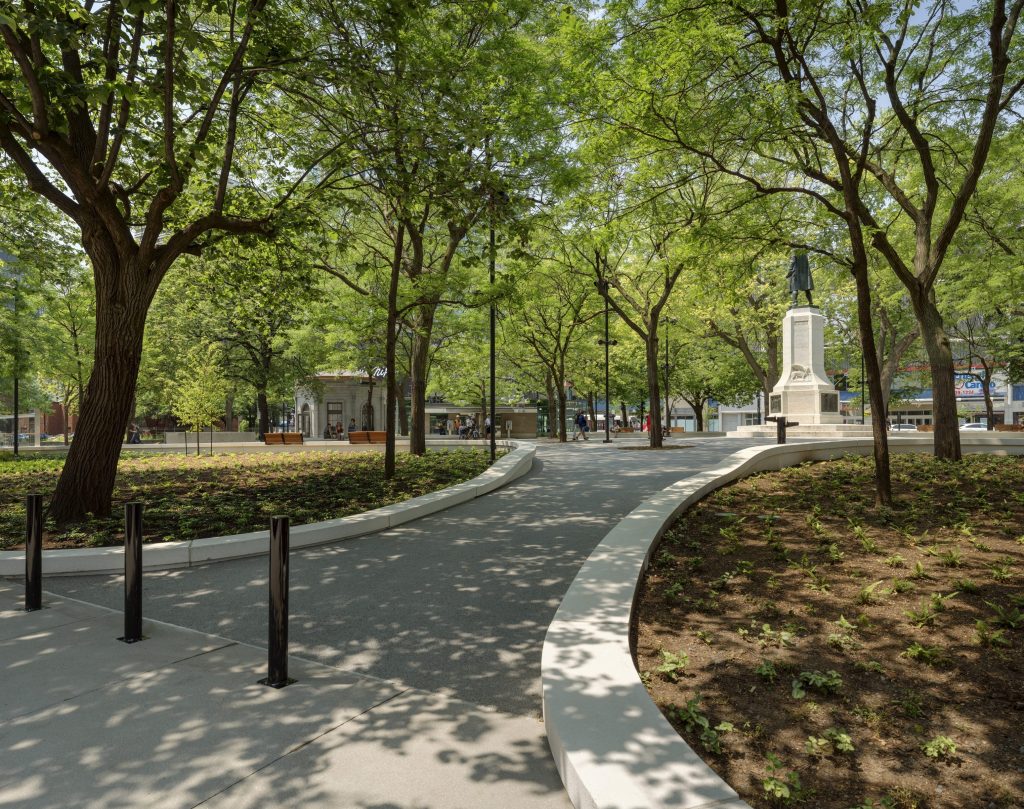 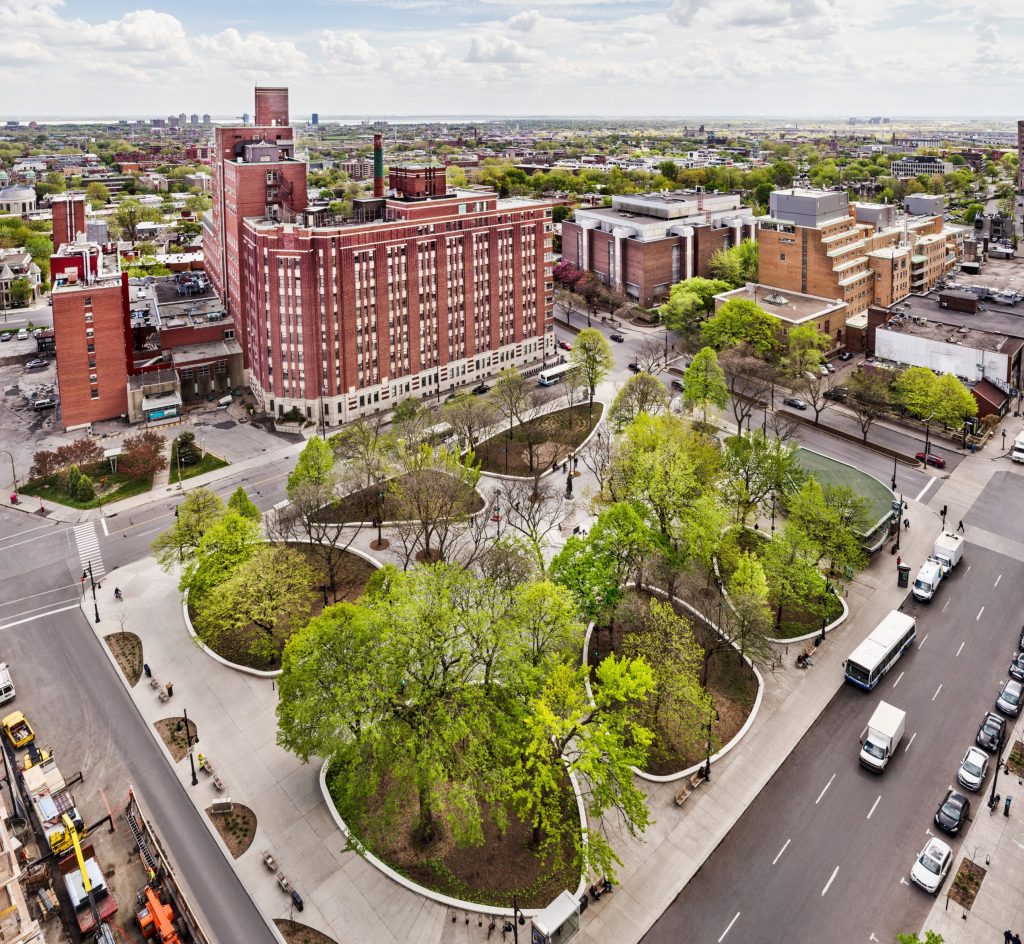 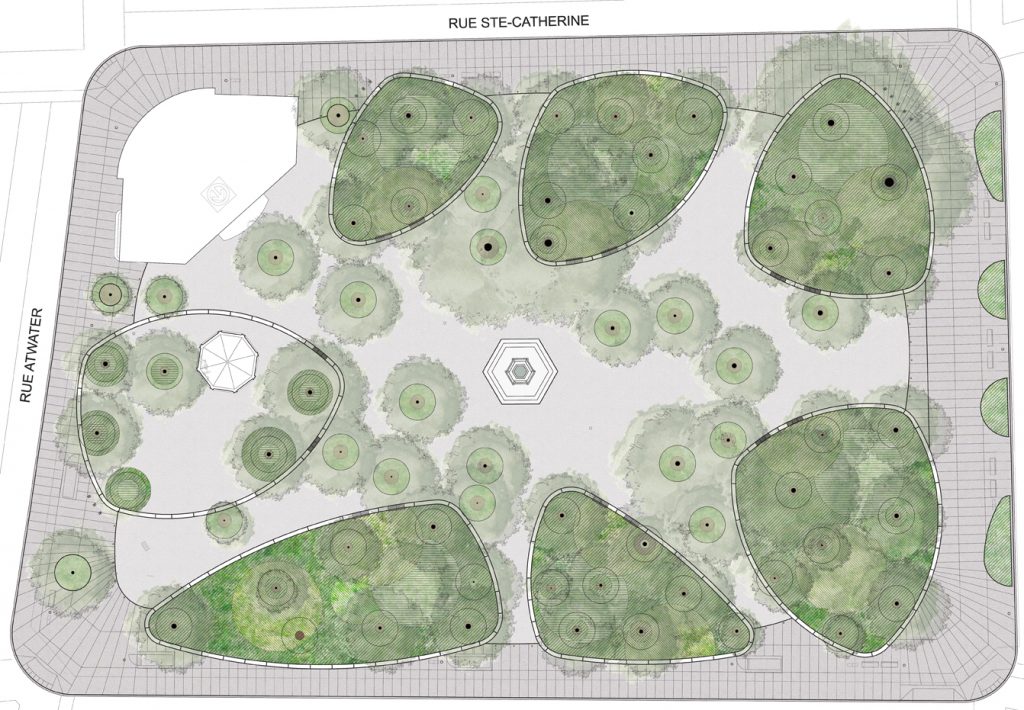 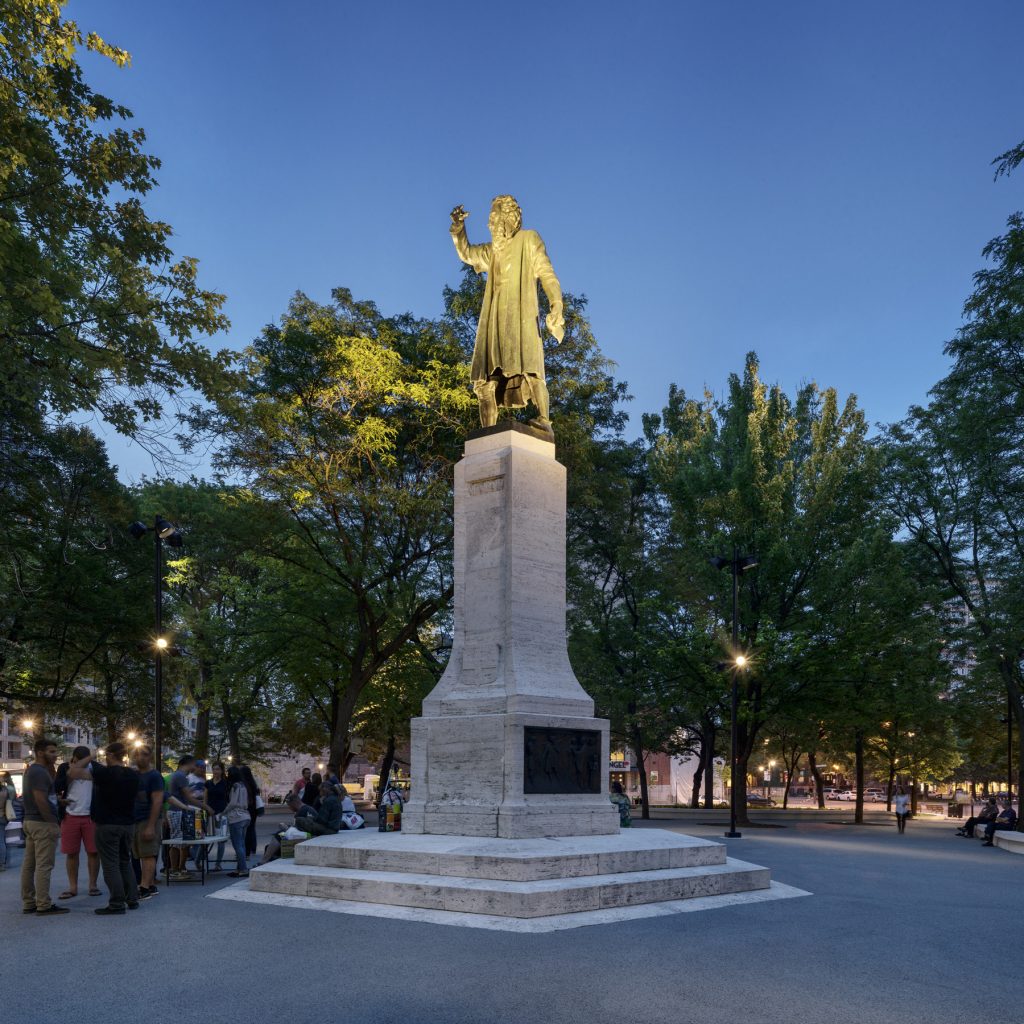 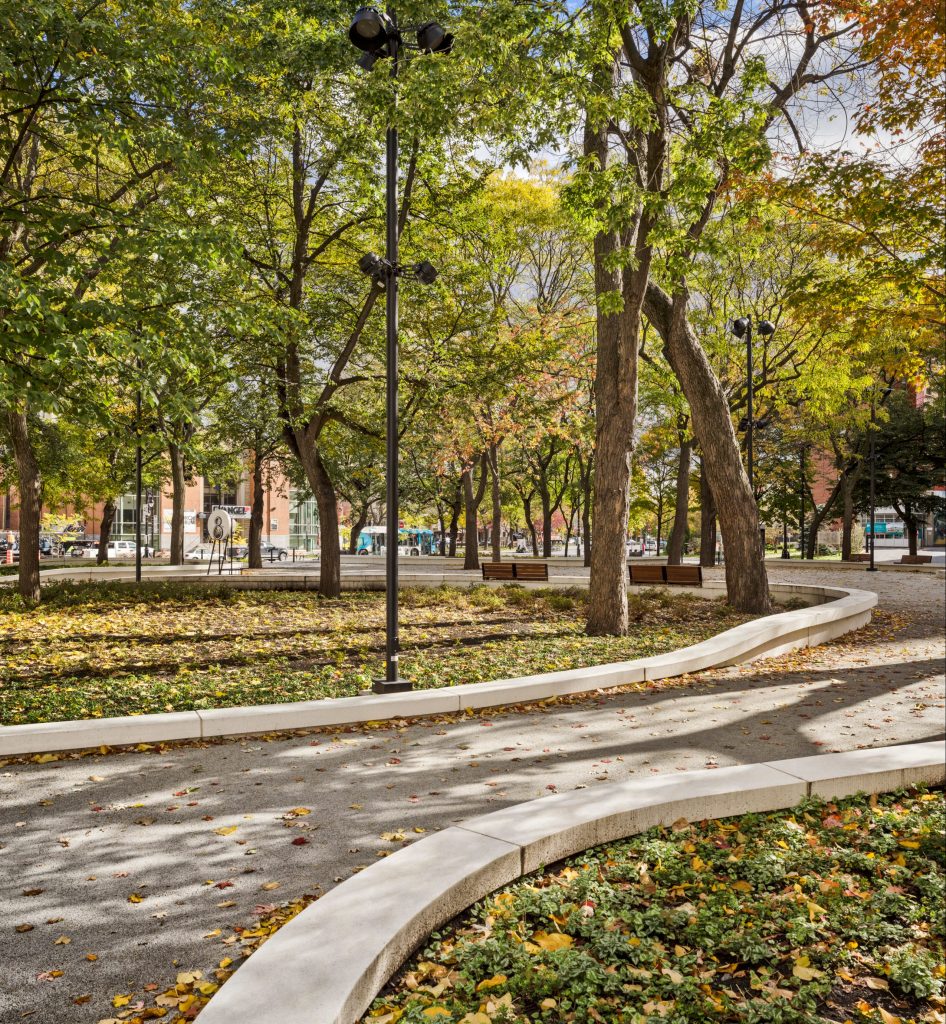 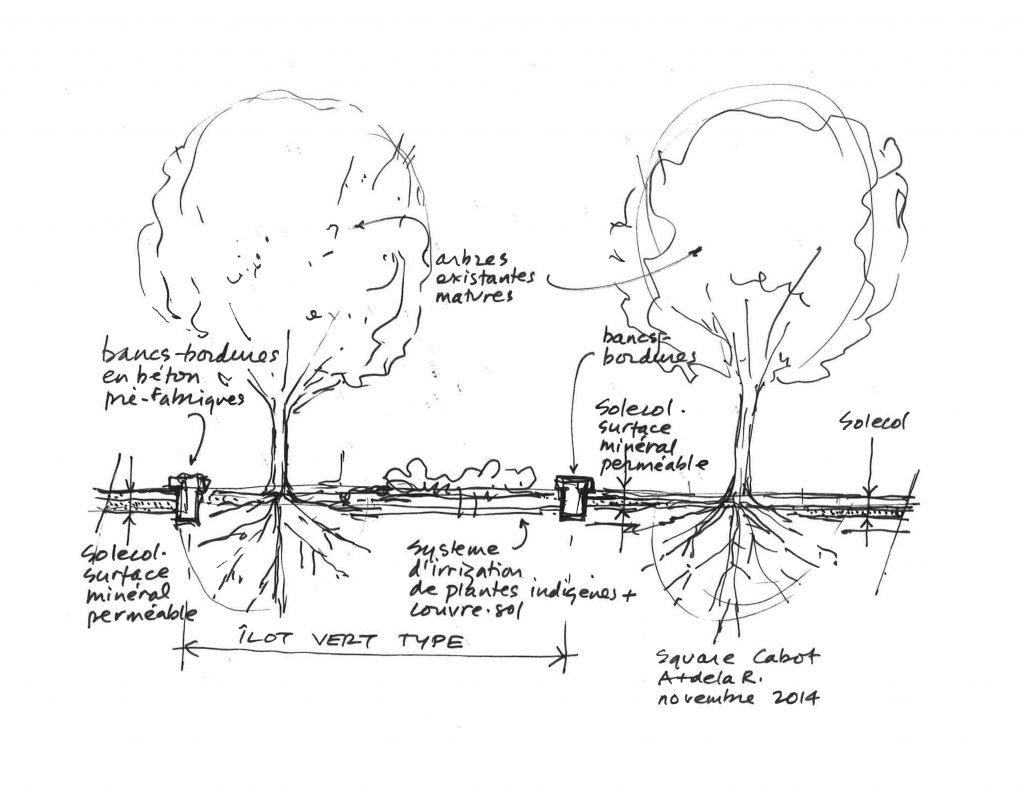